Are you ready for the Triad season?

Recent media coverage of the National Grid’s winter forecast for gas and electricity demand and supply has highlighted the challenges faced in ensuring the lights stay on in the coldest and darkest months of the year.

To help manage spikes in demand, the Triad pricing system aims to encourage large industrial and commercial energy users to reduce consumption and in turn reduce demands on the grid.

Although it is an important tool in managing the electricity system, it is also something many buyers and generators have little awareness of. Over half of those who signed up to SmartestEnergy’s recent webinar on Triads said they didn’t know much at all about the system.

Under the Triad system, consumers pay a Transmission Network Use of System (TNUoS) charge based on their location and their electricity use over the three Triads each winter – the half-hour periods of highest system demand between November and February.

The timing of these Triads, which have to be separated by at least 10 clear days, is not known in advance. That means if major energy users want to avoid high TNUoS costs, they must try and avoid all potential peak periods – which has the net effect of reducing demand throughout winter.

For large consumers, reducing demand during the Triad periods can significantly lower their energy bills. As well as TNUoS costs, there are also other financial benefits as these peak times will also attract additional charges such as those related to distribution and the capacity market.

The growth of demand side response services also offers some exciting opportunities for those businesses with the flexibility to shift their demand away from peak periods.

For embedded generators, payments are made under the system for any exported power during the three periods. So being aware of Triads and increasing generation if possible can be a lucrative source of additional revenue.

On top of the financial benefits for consumers and generators, there are potential reputational advantages for both from active involvement in helping balance the grid and ensuring energy supplies are maintained.

Although the timing of the Triad periods is not known until the March following the Triad season, there are some useful pointers from the past in trying to predict when they might occur.

For example, there have not been any Triad periods on a Saturday or Sunday since 2004/2005 with the only Friday Triad falling in December 2013. Mondays are the most common day for a Triad, followed by Thursday with 17:30 by far the most regular time.

Given the risks and opportunities involved, SmartestEnergy’s Energy Management Team operates a Triad warning service to help our customers. Alerts flag up the likelihood of Triads occurring to arm customers with the knowledge to prepare and react.

As you can see, there are some real benefits to be had for consumers and generators that take notice of Triads. If you can see the value in Triad management for your business, contact us to make sure you are signed up for our Triad alert service and watch our webinar below to learn more. 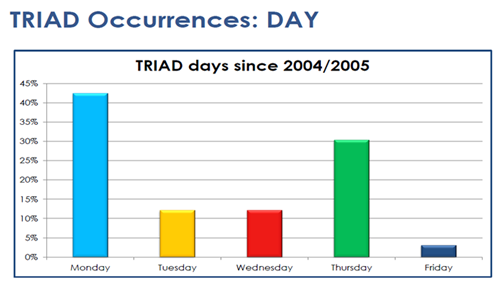