In the latest edition of our monthly power market blog series, Head of Sales Trading, Fanos Shiamishis and Head of Asset Backed Trading, Simon Kneale take a look at changes across commodity markets in August, covering the power and gas markets system prices and the Balancing Mechanism (BM), where we came 5th in the highest cashflow per available MW for our peaking plant BMU.

Power & Gas
Several risks have evolved during the month of August which made for a very volatile end to the month, with Power, Gas and Carbon approaching their pre-COVID lockdown levels for Winter 20 contracts. 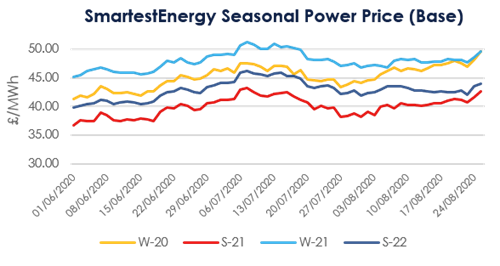 The Winter-20 power contract rose significantly in value over the month of August. Having opened the month at around £44.85/MWh, it ended the month at around £50.94/MWh – the highest price the W-20 contract had reached before September. A continued bullish trend in EUA/Carbon prices underpinned power price recovery. Whilst prompt markets were heavily impacted by volatile Wind Generation output, the Win 20 contract had several French Nuclear outage changes to respond to. There was also confirmation that Hunterston B will be decommissioned 2 years earlier than originally planned, due to the graphite brick degradation issue that caused its shutdown in 2018. The modified French Nuclear outage program added further risk of delayed returns into Q4 and Win 20 Peak prices despite no change to overall output.

The Winter 20 gas contract finished August at around 38.4ppth, having steadily risen from August’s opening level of 32.45ppth. The main driver around LNG supply risks was Chevron announcing inspections - possibly leading to shut down at its Gorgon LNG plant. The risk premium then pared back as their findings indicated that they could stagger the shutdown and inspections, but disruption to production levels remains throughout the winter. Transatlantic freight and US Exports/production are also facing uncertainty as they batten down the hatches for storm season.

Coal & Oil
Brent Crude increased in value over the month, trading at $45.12 per barrel on the last day of August. after a month in which the commodity moved less than a dollar up or down on any given day. However, that is still down from the in-month high of $45.52. Global oil supplies remain strong despite the weather-related disruption in the US. OPEC+ members production remains strong while global demand recovery stumbles.
ARA Spot coal reduced in value over the past month, before staging a rally on August 31st. Having started the month at $49.90/tonne, coal lost around $3 in value from its peak, before bouncing back to trade at $52.90/tonne.

Carbon
Following a few months of notable volatility, carbon was a little more stable on the whole throughout August. EUAs now trade at around €28.64/tonne. The fundamental driver was the deferral of nuclear production into 2021 (changing French nuclear outage plans) which adding further premium into 2020 contract, whilst an additional price rally late in the month was indicative of proprietary books trading the trend/technical indicators. 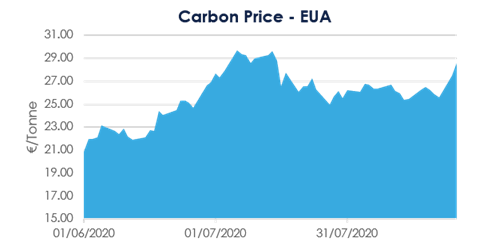 System Prices
Onto system prices now then and the maximum system price for August was recorded at £97.75/MWh, an increase of £12.98 from July, and the minimum at 50 pence per MWh. Interestingly, there were no periods with negative system prices in August – once again down from the 15 half hourly periods with negative prices we saw in July, compared to the 59 separate periods we saw in June.
Moving on, Day Ahead N2EX prices (Base) reached the highest price seen this year at £48.86/MWh on 24th August, whilst the minimum value was £25.57/MWh – a significant change from recent months where prices have consistently hit minimum levels of below £10/MWh in response to high load factors for renewable generation.

Balancing Mechanism
SmartestEnergy’s North Wales/Mersey BMU achieved the 5th highest peaking plant cashflow per available MW in the BM in August at £5.60 (see chart below), with our other BMUs fairing less well mainly due to their location and consistent constraints imposed by National Grid leading to lower BM load factors at the same or similar offer prices.

During August, BM offer acceptance prices were as high as £250 for Dinorwig-4 (pumped storage) occurring on 1st of the month. For SmartestEnergy’s peaking plant BMUs prices got as high as £89/MWh, accepted on the 11th when wind was very low and the system went consistently short.
Average offer prices for Smartest Energy were in the region of £52-53/MWh for the month. Wind was low. Total offer volume across all BM assets was very similar in August compared to July at 2.1TWh, the vast majority being CCGT gas power stations.