Demand outlook continues to increase as temperature starts to bite 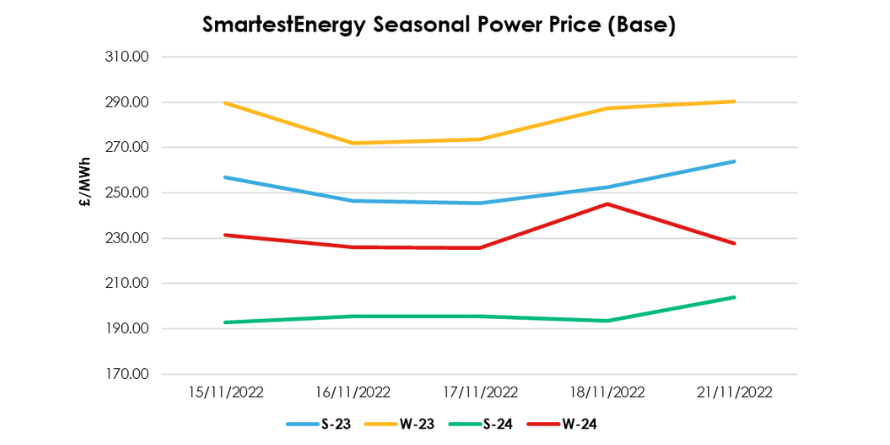 Head of Sales Trading, Fanos Shiamishis reports on the energy market activity, covering the period 15th – 22nd November 2022. On our end of day pricing tool, the Source, we published an in week high of £290.50/MWh for the Summer-23 seasonal power price yesterday. In this blog Fanos shares the market news and updates from the last week.

The UK gas system was short last Tuesday due to lower LNG supplies from South Hook and the Isle of Grain. Lower Norwegian flows also contributed to short supplies following a fire at Asgard field which was expected to be back up and running two weeks ago. Interconnector UK (IUK) also began a planned shutdown until 30th November. Although German gas storage has been full since 11th November, there are still some risks of undersupply if we are hit with a cold spell. EDF also extended an outage on its 910MW Bugey 2 reactor in France, which pushed the weekly and monthly French baseload price higher.

Norwegian flow to the UK and Europe gained stability from Wednesday and strong renewable output outweighed the cold weather forecast in the short term. Germany completed the construction of port facilities for one of the LNG terminals, which should now be able to receive LNG carriers early next year.

Due to the uncertainty following the delayed reopening of the Freeport LNG terminal in Texas, no trades were made for power beyond Summer-23 on Thursday. Vessels were reported to have been turned away, indicating more lengthy delays. The latest updates from Freeport LNG terminal indicates a mid-December restart with expectations that production will get to 2BCF per day by Jan 2023.

Yesterday, the UK gas system opened 29mcm long with strong flows and UK Continental Shelf (UKCS) production. The key drivers for price increases were driven by the latest temperature forecasts which reported a sharp drop. Forecasted demand is set to increase from next week indicating the first signs of demand reverting to seasonal normal expectations.