In the first edition of a new monthly blog focused on market prices, Head of Sales Trading, Fanos Shiamishis & Sales Trader for SmartestEnergy, Ben Dods, take at look at changes across commodity markets throughout August, as well as the drivers behind them. 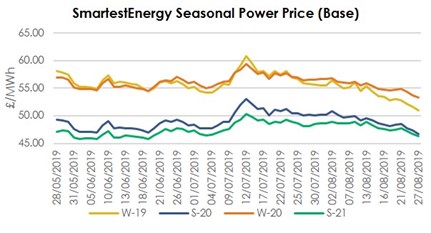 Beginning with the Winter 19 power contract, the price gradually came off over the previous month, losing more than £5/MWh from month open to trade around £51/MWh.  Summer and Winter 20 contracts also saw similar declines, both losing between £3/MWh and £4/MWh within month. This has been driven by weakness in EUA carbon prices as (despite a reduced auction supply in August 18) there has been selling which has kept a lid on prices. This has affected spark spreads - and in turn the power contract.

Additionally, gas continues to be sold as UK Mid-Range Storage approaches full capacity this month, with North West Europe not far behind. The W-19 gas contract continues to lose risk premium massively too. USA Liquid Natural Gas projects continue to come online as well. Once they are fully ramped up, they will further contribute to an already oversupplied LNG market.

Following seasonal power prices as usual, the Winter 19 gas price reduced over August, albeit showing marginally greater resilience than power. The trading level of £45.55/MWh is £4.75/MWh lower than where it began the month. This occurred due to the oversupplied LNG market, with strong storage stock levels for this time of year. Chinese demand is slowly depressing global LNG, which in turn means Europe is a sink for reduced European gas prices.

The general trend for coal prices in August was a downward one, with the commodity losing $3.65/tonne since the 1st of August, when it was trading at $58.55/tonne. This is more in line with trend we’ve seen overall in 2019 - suggesting a general decline in the value of coal. That said, July saw the coal price increase by over $7 within month. Cheap gas means demand for coal is low as European coal to gas switching takes a hold. Weak European industrial data has also added bearish pressure to coal and gas.

Brent Crude has experienced a sharp in the last month, following on from the volatility of July. Beginning the month at just over $65/barrel, almost $9 had been wiped off the value of Brent by August 10th. It then staged a rally back up to around $61.50 by the middle of the month, before coming back down to around $58/barrel. After another brief fightback, oil trades at around $59/barrel.

Carbon (EUAs) meanwhile has started dropping off from the record peaks seen in July, losing just over €4/tonne from the beginning of the month, where it was trading at €29.42/tonne. The decline in price has been relatively consistent throughout August, with the current level representing the lowest price we’ve seen over the period. As previously eluded to, August is normally a time of tight EUA auction supply and as such normally adds bullish factors. Weak European economic growth data and an uptake of European coal to gas switching has also limited buying interest for EUAs. 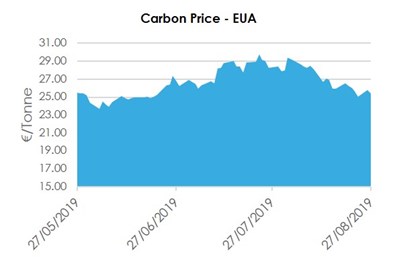 Analysis conducted by the Grantham Research Institute (GRI) has suggested that a UK Emissions Trading System (ETS), implemented in the event of a no-deal Brexit, could be the worst possible outcome. In their response to a government consultation on the subject, the Institute suggested that if UK participants could only trade allowances with each other, then the system would be too costly. The GRI claimed that government should either negotiate the UK remaining in the EU ETS, or establish a link between the UK and EU Emissions Trading Systems.

System Prices remained relatively stable in relation to last month, with both maximum and minimum values only increasing by around £2/MWh to reach £110/MWh and £2/MWh respectively. The fact that system prices did not spike during the blackout on August 9th shows that National Grid’s procedures to manage such an event worked relatively well, although the fact that the power cut was caused by a frequency issue rather than lack of reserve also explains why system prices stayed normal.

Day Ahead N2EX pricing saw a significant dip in the middle of last month, reaching a low of £27.86/MWh on August 17th – a drop of almost £10/MWh day-on-day – and the lowest price recorded this year. This has been put down to extremely high wind increasing volatility for the N2EX auction out-turn. On a more general note, both maximum and minimum values dropped around £4.50/MWh month-on-month.

To hear our full power market commentary for August, listen to our latest podcast