In the latest edition of our monthly power market blog series, Head of Sales Trading, Fanos Shiamishis and Trading Optimisation Analyst, Leo Burdorf take a look at the effects of recent storms on system prices, as well as changes across commodity markets throughout February.

In the day ahead market, supply margins were expected to be tight and an auction peak hour price of £93/MWh reflected this.

By midday, the within-day supply margin (also known as the de-rated margin) was at 1GW for the peak period but then decreased to 200MW. NationalGrid called upon Short Term Operating Reserve (STOR) services to manage the system as demand outstripped supply. The STOR replacement price is determined by the LoLP (Loss of Load Probability), which is usually zero but due to the severely tight margin, it was 37% for Settlement Period 37 (18:00). This probability factor is then multiplied by VoLL (Value of Lost Load), which is set at £6,000/MWh resulting in the very high system prices between 18:00 and 19:00.

System Prices hit a minimum of -£66.25/MWh in February, with negative pricing for several periods (15 settlement periods) as increased levels of wind generation meant that wind generators were constrained off. The maximum system price was £120/MWh.

Even as the UK experienced a month with high wind penetration, the system has been short for more than 60% of the time. In the BM, we have seen a record level of bid action for wind generation for a single month with 541,000 MWh. The Western HVDC Link outage, which lasted well into February also contributed to this.

During Storm Ciara, the system actually went 2.4GW short as cut-off speeds for some wind turbines were reached. However, the evening peak system prices did not rise above £45/MWh even then. For Storm Ciara accepted bid levels for wind generation reached above 68,000 MWh. 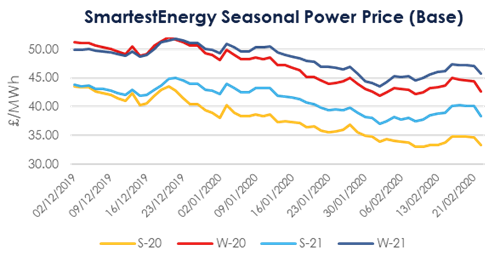 With global LNG supplies remaining strong, the Summer 20 power contract continued to soften from an opening mark of around £34/MWh. Early February headlines were dominated by the possibility of China turning away shipments and exercising the Force Majeure clause. Summer 20 showed more volatility than we’ve typically seen in recent months throughout February, although any gains made since the 13th of February have been more than offset, with power trading down to £32.85/MWh.

Gas has followed a slightly more consistent downward trend than power this month. Beginning February at 25.86 pence per therm, summer 20 has lost over 3 pence to now trade nearer 22.20p/th. In the middle of February, we looked to be hitting record low prices which may have triggered some “profit taking” or shorts closing out. Some strength noted in Carbon (EU Allowances) and Brent over the same period may have influenced the buyers too.

The front half of February saw a recovery in the price of Brent Crude due to OPEC production cuts and forecasted restrictions on global freight associated with measures to contain the Coronavirus. Gains made have since pared with a bearish view on global demand for Oil. Brent opened the month around $58.20/Bbl and has since softened to $55.45/Bbl.

Similarly, coal (ARA Spot) has seen an overall downward trend since February 1st. Now trading at around $48/tonne, the commodity has lost $2 in value this month. The main headlines around coal followed the trend of decommissioning of coal fired plants, with Uniper announcing their intention to shut down 2.9 GW of German hard coal fired capacity by 2025. The UK is also planning to bring the coal-phase out deadline forward by one year to 2024.

Carbon (EU Allowances) have followed the same general trend as the other markets. Having opened at around €23.50/tonne in February, Carbon reached a peak of €25.66/tonne before coming off again in the last week of the month.