In the latest edition of our monthly power market blog series, Head of Sales Trading, Fanos Shiamishis, Sales Trader Jean-Philipe Marty and Trading Optimisation Analyst, Leo Burdorf take a look at changes across commodity markets in July, as well as the drivers behind them. 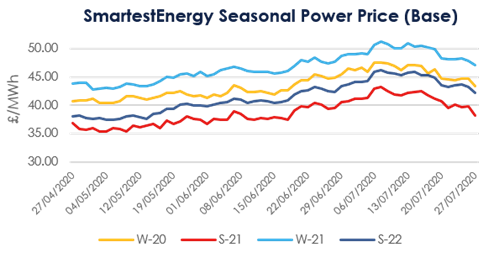 The Winter-20 power contract continued to rally from June’s bounce-back in the first half of July, reaching a peak of £47.55/MWh. Power prices initially grew on the back of the rallying Carbon EU Allowance December 20 price, as well as an increase in the price of prompt gas. It held relatively steady until the middle of the month, before dropping off in response to Norwegian flows resuming to normal levels and an increase in prompt renewable generation, leaving it to trade at around £43.32/MWh.

Winter 20 gas followed a very similar curve, hitting a within-month peak of 35.22ppth, before reducing in value toward the end of the month, reaching a mark of 31.1ppth. Gas prices firmed up during the second week in July as nuclear outages were extended and there were short term reductions in Norwegian gas flows. The continuing outlook for Winter 20 contracts is mainly driven by the changing Q4-20 French Nuclear maintenance program.

Brent Crude held very steady at around $43.39 per barrel after a month in which the commodity moved little more than a dollar up or down on any given day. Its current value represents an overall increase of $2.36 from where it opened the month.

ARA Spot coal followed a similar path to oil in July with few significant movements in value day-to-day. The current level of $49.55 per tonne represents a 40 cent drop from July’s opening mark, having reached a peak of $51.20 on July 6th.

Carbon saw strong support at the beginning of July, reaching a peak of €29.68 per tonne in the first week of the month – a level which we haven’t seen Carbon reach since this time last year. The second half of July saw increased volatility in EUAs, driven by a combination of trend and speculative trading (once prices went above €29/Tonne, large lots were joining the bid stack), whilst speculation around Emissions Trading System changes and reduced French Nuclear availability also added to the unpredictability.

The maximum system price for July was recorded at £84.73/MWh and the minimum at minus £60/MWh, with an average daily spread was £55.35. Interestingly, there were only 15 half hourly periods with negative prices compared to the 59 separate periods we saw in June.

Day Ahead N2EX prices showed a similar range with a maximum of £48.99/MWh and 16 hourly periods with negative prices. All the negative prices occurred on the 5th /6th July as high renewables output met with low weekend demand.

There is general a slight upward trend visible in the Day-Ahead N2EX and Intraday APX prices visible with higher averages and maxima.

Offer acceptance volume for gas peakers in the Balancing Mechanism (BM) again was very high with 23GWh, albeit not that close to the record level we saw in June (42GWh). Average accepted offer prices have slightly decreased to £46.52/MWh compared to £47.64/MWh in June.

Total Bid acceptances in the Balancing Mechanism (BM) from onshore wind generation turned out lower than previous months at 191GWh, whereas we saw 227GWh in June and 248GWh in May.