In the latest edition of our monthly power market blog series, Head of Sales Trading, Fanos Shiamishis, Sales Trader Jean-Philipe Marty and Trading Optimisation Analyst, Leo Burdorf take a look at the recent bounce-back in wholesale prices, as well as changes across commodity markets throughout June.

Over the past two months, wholesale power prices have risen by almost 20%. From the low prices seen in April as demand reduced in reaction to the imposition of lockdown conditions and the introduction of social distancing measures, the winter-20 contract is now back above £47/MWh, a move of more than £9/MWh over the past 3 months.

Focusing on the month of June alone, the Winter-20 contract received significant, and sustained support, having trended upwards to the tune of around £4.15/MWh. This was driven by the continued easing of lockdown restrictions across Europe as well as UK Government commitments on financial measures and the consumption outlook for power into Q3- 2020 looking to recover from lockdown lows. Now trading at around £47.55/MWh, power prices are returning to more attractive levels for generation projects. 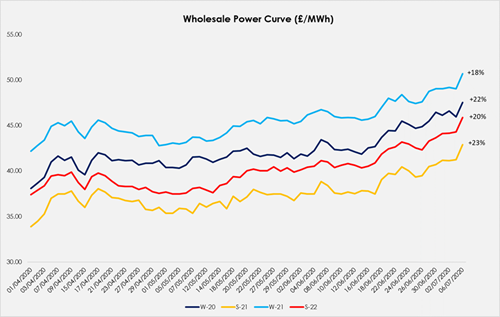 ​The maximum system price was recorded at £64.50/MWh and the minimum at -£65.94/MWh. The average daily spread was £51.57. There were 59 half hourly periods with negative prices. We have seen a record level of offer acceptances for gas peakers - 42GWh - compared to 18GWh and 15GWh in May and April, respectively. Bid acceptances from onshore wind generation at 227GWh almost reached last month’s record of 248GWh too.

Winter 20 gas saw a similar curve to power through June, having gained about 3.6 pence per therm from it’s opening level last month. The penultimate day of the month saw the commodity reach an in-month high of 33.65 pence per therm, supported by further disruption to the availability of French nuclear generation – which added some increase in gas for power generation demand.

Brent Crude is beginning to steady at around $41.16 per barrel after a month of ups and downs. Having closed May at $35.43, Brent shot up just under $7 in the space of a week at the beginning of June as lockdown restrictions continued to ease, alongside reduced OPEC output in June – whilst both Iraq and Nigeria also complied with the reduced quotas. Since then, the imposition of local lockdowns, as well as fears of second outbreaks in China and across the world, have brought the price back down to just under $39 per barrel. Reaching the end of June, the range in which Brent traded tightened, as the market began to adjust to conditions.

ARA Spot coal followed a similar path to oil at the start of June, jumping more than $8/tonne in the first two days of trading for the month – reaching a high of $46.75/tonne. That said, coal was a lot more stable throughout the remainder of the month, trading in a range no bigger than $2 throughout. It currently sits at around $45.45/tonne.

Carbon EU Allowances have reflected power in so far as that they have been strongly supported this month, with displaced nuclear generation leading the initial rally. Having begun the month at €20.90/tonne, carbon has gained more than €5.50/tonne to reach its current level of €26.55/tonne.