In the latest edition of our monthly power market blog series, Head of Sales Trading, Fanos Shiamishis takes a look at changes across commodity markets throughout October, as well as the drivers behind them. 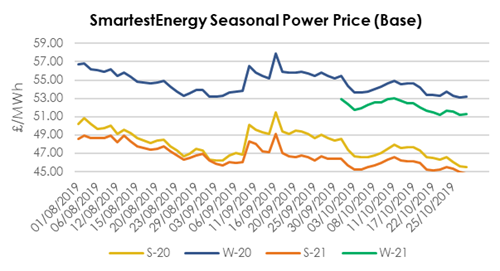 Power
Beginning with the Summer 20 power contract, which opened in October at £48.55/MWh, we’ve seen a steady drop in value over the month. It now trades at around £45.50/MWh which represents a loss of over £3 from month open to close. This has been the case despite an increase on carbon. As such the spark spreads for S-20 have increased, but power still traded lower as the gas came off.

Gas
Following seasonal power prices as usual, the Summer 20 gas contract has lost more than 5 pence per therm over the month, now trading around 39.75 pence per therm. The downward trend has been consistent across October, with the contract value never threatening to head back towards its opening level of 44.90ppth. Storage stocks remain high and weather remains normal, leading to no real demand constraints as such this month. More LNG is moving towards Europe with a flurry of cargoes expected. In fact, the past month has seen several LNG cargoes being used as floating storage, as prompt gas contracts are so heavily discounted in relation to the front month. The front of the gas curve is in steep contango.

Oil
Onto oil and Brent Crude has bounced back in the last week or so, heading up beyond the levels at which it opened the month. Having started off at $59.35 per barrel, oil dropped to an in-month low of $57.36 just 3 days into October, before regaining strength to trade in between $59 and $60 for the majority of the month. It now trades at an in-month high of around $61.87 per barrel.

Coal
Coal has seen a decrease in value overall in the past month. Having started last month bang on $60/tonne, the commodity reached a peak of $61.30/tonne on October 8th, before holding steady around the $60/tonne mark for most of the month. However, value has dropped notably in the last week, with coal now trading at around $56.70/tonne - over $3.50 lower than in it’s in month high. This is due to high coal stocks in European ports leaving little forward demand for coal. Even with freight experiencing a volatile time, coal has (to some extent) followed the gas and power.

Carbon
Carbon (EU Allowances) meanwhile have remained volatile in line with trends we’ve observed over the last few months. Opening the month at €25.04, Carbon has now recovered to finish at around €25.45. However, this represents a significant gain in value from October 8th, where Carbon hit €22.53 – the lowest price we’ve seen for EU Allowances since April. Brexit uncertainty and volatile Foreign Exchange markets have driven the volatility that we’ve seen within EUA contracts. After the weakness observed at the start of the month, the securing of the Brexit deal with Brussels boosted confidence in EUAs and in the fact the UK would remain within the ETS system. For the December 19 contract auction, supply and short-term fundamentals will come to play in affecting the price as we approach expiry.

System Prices
System Prices showed a greater spread between maximum and minimum in October, with maximum prices hitting £157/MWh, whilst minimum prices reached minus £60/MWh, continuing the trend of more commonplace negative pricing. Increased volatility such as this is expected as we enter the winter months, with demand ramping up and high load factors for wind generation meaning that any forecasting errors are magnified.

Day Ahead N2EX
Day Ahead N2EX prices remained comparable to September’s prices, hitting a maximum of £41.85/MWh – a drop of £2.35 from the high mark in the preceding month. The minimum value of £29.57/MWh was recorded on October 11th, but this was a bit of an outlier given that the price did not drop below £31 at any other point during the month.