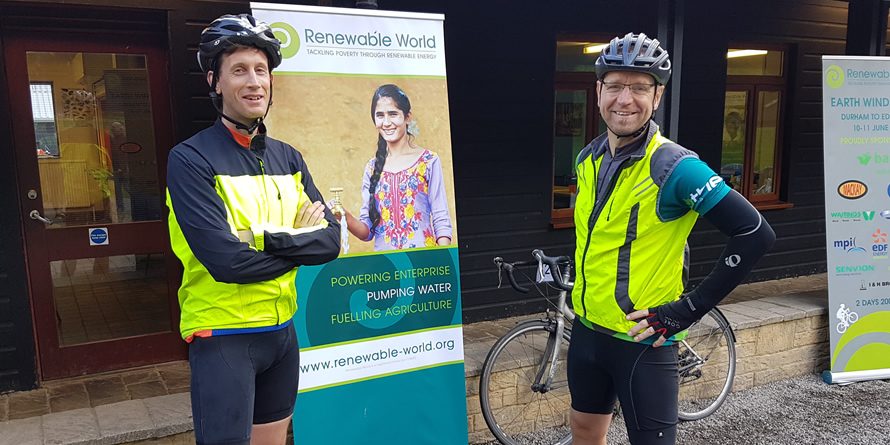 SmartestEnergy has been a leading supporter of renewable energy projects for a number of years so it was no surprise that last year we chose Renewable World as our charity partner. A fantastic charity using renewable technology to empower communities in developing countries become resilient and self-sufficient.

Head of Marketing, Mike Shirley took part in their flagship Earth Wind and Tyre cycle event and shares his experience mile by mile.

When the request for volunteers to take part in the Earth Wind and Tyre cycle event, I thought “why not give it a try?”. It’s a great charity and it’s good to have a challenge to work towards. A couple of drinks at the Christmas party and I had signed up!!

So what does it take to do 100 miles a day, for two days on the trot with some challenging hills and passing 10 wind farms -typically in windy spots? A growing realisation dawns, that this is no corporate jolly! Training and preparation was key, you need to get miles in the legs, train when you are tired and you need to do wet weather training, and dry weather, just in case!

My commute is nearly 30 miles so I cycled to and from work once a week from February, raised to twice a week in April, when the clocks go forward but never managed the planned three times a week leading up to the event and the long weekend rides? Well, sometimes family and work life doesn’t quite go to plan but hey, I had done most of what I wanted to and, yep, I’m always tired so I ticked that box!

Then with less than three weeks to go, I am hit by a car. For a second I wondered if this had all been for nothing but miraculously, the car came off worse than my bike and I.

So I get to the start line in Durham with 50 other riders, all nervously looking for the weather to break - it doesn’t so we set off in the rain. Keep it slow but keep pedalling, that’s what they say so that’s what we do, just pedal, pedal, pedal and next thing you know we’re at the first food stop. Eat. Just eat as much as you can!! We needed all the calories we could get

It’s still cold and wet so we get on our way again and that’s how it continues. The hills are hard and longer than anything you get “down south” but the trick is to get the right rhythm and slow it down because once you reach the top, you get to go downhill and cash in on the free miles.

And so it continues, break it down to manageable sections (based around the plentiful food stops) so as a whole it doesn’t seem so unachievable.

Eventually, the end is in sight, we’ve made it! Day one complete!

Off the bike, grab a shower, cup of tea, sit down on a chair and enjoy some real food. We were even given a couple of beers, they must be medicinal.

Morning arrives and we’re ready to take on the second half. After a great full English breakfast we hit the road again.

It wasn’t too bad, until we hit the first hill and boy it’s a hill! Dig deep, go for the low gear and just get back to the rhythm from yesterday. The hills are front loaded on the second day with a long run off from the top of the last hill. 30 miles into Edinburgh along the coast, just a couple of tiny bumps as you reach the end. How hard can it be?

But the wind had different ideas, a strong gusty headwind was brutal and allied with the loose road surface we were having to work just as hard on the downhill as we did on the up! That wasn’t in the script and not what my now fragile resilience was in need off.

Slowly, the coastal towns turned into Edinburgh suburbs and we’re on to the nicely tarmacked tourist road around Arthur’s Seat, and there’s the Royal Mile.

“Isn’t that the Kilderkin pub the pub we’re in later?” Some cheers ring out and we have actually gone and done it! Wow!

Time for a shower and some fresh clothes and then we head off to the pub for a couple of much needed beers to celebrate the challenge and hard work we’ve all been through together. To have done it feels fabulous!

So will I do it again…? I’ll get back to you on that one.