Head of Sales Trading, Fanos Shiamishis, comments on the lack of European gas supply as global demand increases, resulting in a significant risk premium for the coming months. Meanwhile, Spot Power Trading Analyst, William Lake, explains the system price movements observed in July as the within-day-system went short for a sustained period leading up to an eventual price high. William wraps up with a view of volatility in the gas market, which impacted day ahead prices throughout the month.

Additional risk for power during July – on days where renewables load factor was low (namely wind) – set the view for this winter. Despite the National Grid ESO prevailing view that there is adequate supply to meet system margins this winter, there is an expectation of peak period constraints where wind output could significantly underperform (download report here).

Winter-21 gas has followed a similar trend, opening the month at £94.66ppth then dropping to £80.48ppth on the 9th July. The closing price for 26th July was slightly up on the month start at 95.94ppth.

The continued risk around European gas storage inventories supported gas prices during July. Expectations on gas purchasing across Europe, coupled with a global increase in demand, has seen a significant risk premium added to August and September contracts, which is aligned with storage injection forecasts.

More importantly, the spread between the rest of the summer and Winter-21 effectively traded negative by 29th July, with August clearing at £103.28/MWh and Winter-21 trading at £102.70/MWh. The premium remains in Q4-21, set by the forecasted storage build during the period.

There was some respite for short positions, which were noted immediately after reports of US/German agreements paving the way for Nordstream 2, but the overall market sentiment remained bullish. 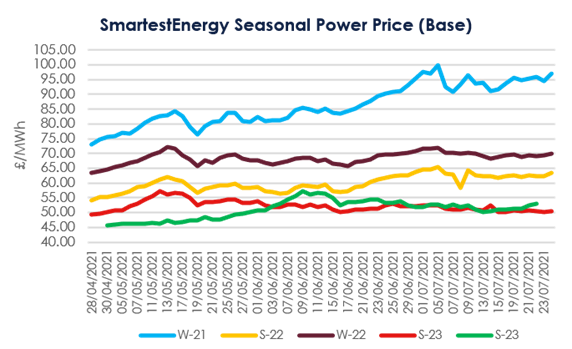 In oil markets, Brent Crude saw significant volatility this month. It opened at $75.90/barrel, then sat between $73-77/barrel from the 5th to the 17th July, before it dropped to closed at $69.51/barrel.

Threats to demand growth were evident following reports of escalating COVID-19 cases and renewed travel restrictions in addition to “on/off” OPEC+ agreements on 2021 H2 production quotes. Despite increased production, the draw on stocks remains strong and the $8 loss incurred in mid-July has recovered to register a small gain in the front month contract compared to 30th June price.

Coal (ARA Q4-21) rallied with global demand for generation triggered by high power prices. Beginning the month around the $100.00/tonne mark and closing on 29th July to just over $126.50/tonne.

Following the perceived profit taking at the end of June, Carbon EUA slowly recovered some of the losses incurred and managed to hold above €50/tonne. This was fundamentally driven by support due to increased thermal generation, but is still far short of the €59/tonne level broached in June. 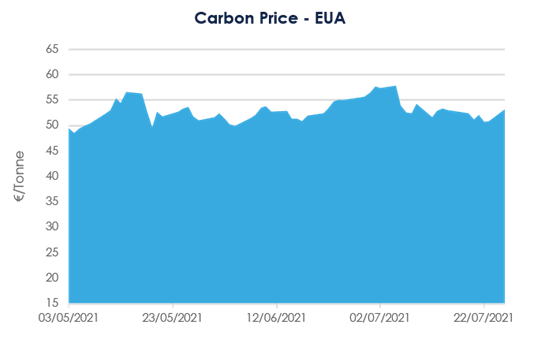 The maximum system price for July was recorded on Thursday 22nd of July at £204/MWh. This high price was reached as the within-day-system went short for a sustained period leading up to this price high. No major thermal units were offline, but there was an imbalance of around 1.5GW from nuclear. Wind out turned very low at around 250MW, and several units had to be taken up to £250 during this short period to make up for the shortfall.

Negative prices this month reached minus £8.10/MWh at settlement period 7 on Thursday the 29th of July. Around 8GW of wind was forecast at this time, and outturn ended up closer to 10GW. As expected at 3am demand levels were very low, which lead to curtailments by National Grid ESO.

Maximum day ahead N2EX prices (base) reached a peak of £107.50/MWh. The minimum price was £83.32/MWh. In July, day ahead prices were at the mercy of volatility in the gas market. At the start of the month the surge in the price of gas, along with low wind, led to a bullish run for day ahead prices. This run fell off as wind output increased during the middle of the month and gas prices stabilised somewhat compared to levels seen several weeks before. Towards the end of July, day ahead prices were pushed to their monthly high by a combination of lower wind output and higher gas prices.