In the latest edition of our monthly power market blog series, Head of Sales Trading, Fanos Shiamishis takes a look at changes across commodity markets throughout November, as well as the drivers behind them. 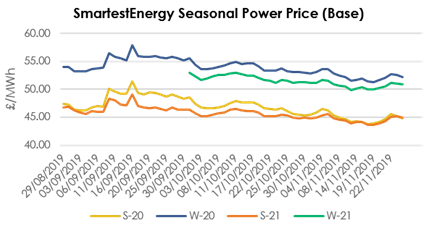 The Front Season contract (the Summer 20 power contract) opened at over £46/MWh at the beginning of November, before proceeding to soften to a low of £43.75/MWh. The back half of the month saw some recovery however, with the contract trading around £44.80/MWh in the last days of November.

The Summer 20 gas contract led the trend seen on power, albeit gas has remained slightly more stable. It traded within a 3p/therm traded range during November, with a high at the beginning of the month of 50.15p/therm and a low of 47.3p/therm on 19th November. The final week of November saw the contract settle to around 38.3p/therm.

The benchmark contract for Brent Crude has gained from month open, now trading at around $63.92/barrel, up just over $3. It remains to be seen how the market will react to the OPEC meetings on Thursday and Friday (5th/6th December). OPEC will decide on a new deal that extends beyond the current deal, which ends at the end of March 2020.

Conversely, a bearish trend has seen coal decrease in value overall in the past month. Having started last month at just under $57/tonne, the commodity failed to return to that level in November, now trading at around $56.15/tonne. This does represent a recovery in the last few weeks, with coal having dropped as low as $54.80 on November 18th.

Carbon (EU Allowances) meanwhile have steadied this month, having experienced a pretty volatile 2019. Prices have varied between a low of €18.72 in February up to the summer high of €29.76. Carbon opened and closed the month at almost the same level with €25.29 and €25, respectively. However, carbon did decrease towards the middle of November before improving again towards the end of the month. The anticipation of policy changes around carbon emissions – including the determination of the 2020 carbon price - played a role here. New European Commission President, Von der Leyen assumed office on the 1st December, promising an even harder stance on carbon emissions, which will add bullish pressure on the carbon price.

System prices showed a higher average daily spread between maximum and minimum in November, £77.47/MWh, than they did in October, £39.99/MWh. The maximum system price was at £142.53/MWh and the minimum at -£25/MWh. The highest accepted offer price was at £260/MWh, but this was not price setting. SmartestEnergy’s BMUs were able to achieve accepted offer prices of £99.95/MWh in the last week of November, which was more than any other aggregated or gas peaker unit for that week.