Head of Sales Trading, Fanos Shiamishis takes a look at changes across commodity markets throughout September, as well as the drivers behind them. 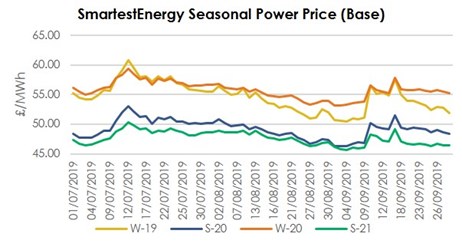 Beginning with the Winter 19 contract, which expired at the end of September, it closed at £51.85/MWh. This represented a slight rise on September’s opening level of £50.75/MWh. Looking ahead to Summer 20, the contract opened at £48.55/MWh. Of course, this is lower than the winter contract because demand is lower - during the summer temperatures are warmer, less energy is needed for heating and solar generation increases.

Following seasonal power prices as usual, the Winter 19 gas price rose by 1.2ppth between the beginning and the end of the month, albeit with marginally more volatility than power. The Winter 19 contract closed at 46.3ppth, giving way to the Summer 20 contract which opened at 44.9ppth.

Onto oil and Brent Crude has begun levelling off again after a sharp spike this month caused by drone attacks at the Saudi Aramco oil processing facilities of Abqaiq and Khurais. Despite having been on a steady rise already, the attacks September 14th saw the price of Brent leap from $60/barrel to $69/barrel within day. This increase was more than halved within the space of 5 days as the market has begun to return to normality, currently trading just below $62/barrel.

Carbon (EU Allowances) meanwhile have had a month of two halves. Rising steadily in the first half of September, EUAs reached a within-month peak of €27.02/tonne (up nearly €2 from month open) before coming back off in recent weeks to now trade at around €24.72 – its lowest level since mid-June 2019. 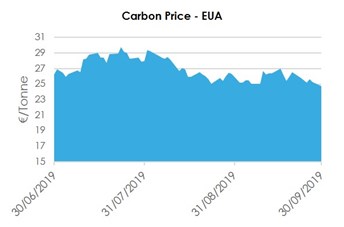 Again, with a perceived increased load factor in gas and possibly coal fired generation to replace the nuclear reduction, expectations of shorter EUA positions supported the bullish trend – which was exacerbated by a negative Brexit related economic outlook softening GBP. The most recent trend has been attributed to a softer global economic outlook, as well as the way in which the US Levy on EU and Chinese goods is impacting markets across the globe.

Coal has seen an increase in value over the past month - as we move closer to winter, demand becomes higher and therefore the requirement for baseload increases. This has also been put down to the French nuclear issue which prompted some speculators to procure coal. Having begun the month at $54.75/tonne, the commodity has gained over $6, having traded at $60.90 cents on September 30th. This slight jump on the last day of the month was in contrast to the general trend seen in the second half of the month however with coal following a general downward trend having reached a peak of $61.75/tonne on the 16th. Brexit news and its effects on exchange rates has also gone some way to affecting the cost of coal over the past month.

System Prices were lower overall compared with the preceding month, with the maximum value hitting £100/MWh, a £10 reduction on August’s high. September also saw a return to negative pricing, when a system price of -£65.82 was recorded overnight on September 2nd.

Day Ahead N2EX pricing remained relatively stable in relation to last month, with both maximum and minimum values only increasing slightly. The maximum price rose by 79 pence compared to August, whilst the minimum value rose by £1.16/MWh.