Following our Monthly Industry Briefing and Power Market Update webinar, Head of Sales Trading, Fanos Shiamishis and Trading Analyst, Leo Burdorf provide a summary of last month’s energy market movements. They recap on the impact colder winter temperatures had on UK power prices along with the UK Brexit announcement on Christmas Eve. They also reveal the highest system imbalance price seen in 20 years that we saw on the 8th January.

In early December, power prices were enjoying a bounce-back driven by the relaxation of the UK’s second lockdown period and greater demand due to colder winter temperatures - Summer-21 opened the month at around £44.30/MWh. Prices rose steadily throughout the month and after the announcement of the UK’s Brexit deal on Christmas Eve, Summer-21 finished the month at it’s highest point of £51.85/MWh. 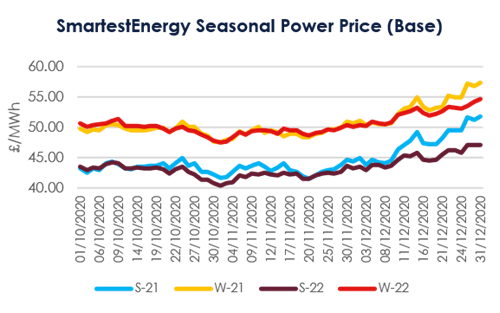 Colder temperatures have contributed to the upward trend in seasonal gas prices. Increased demand saw the Summer-21 Gas price increase by more 8.3p/th over the course of December to trade around 42.22p/th. This was further supported by gains across LNG as the Q1-21 weather forecast remains cold.

Brent Crude saw an increase in value overall last month, rising to just below $4 per barrel, having opened December at $47.52 and closing at $51.38. Crude steadily grew until December 20th, before gains were pared back by the IEA revising their oil demand outlook for 2021 downward as more countries entered stricter lockdowns - slowing economic recovery.

Similarly, ARA Spot coal made relatively consistent, gradual gains over the course of last month – albeit it did gain a noticeable $10 per tonne by the end of December. Now trading at around $71.65, coal prices have been supported by increased winter demand, tighter energy systems and a surge in demand across the Asian and Australian markets.

Carbon EUAs reached new highs in December as the UK confirmed it will be implementing it’s own Emissions Trading System. Whilst this removed risk premia from seasonal contracts, uncertainty over Brexit and reduced auction volumes helped support the price to €32.59/tonne on December 31st – 40 cents below it’s peak for the month.

The maximum system price for December was recorded at £849.81/MWh – almost three times the highest value recorded in November at £240.77/MWh. This has largely been driven by tight system margins when wind output has been low.

On the flip side, negative prices remained consistent with November at -£63.93/MWh.

Maximum Day Ahead N2EX prices (Base) maintained a similar maximum value to November at £77.80/MWh – though this was the exception rather than the rule as prices failed to reach higher than £70/MWh throughout the rest of the month. The minimum value recorded increased by around £5 on the preceding month to reach £37.38/MWh. 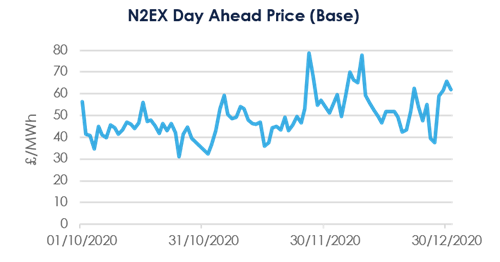 So far this month we’ve already seen tight margins on the GB power system from the cold weather. In this week’s top Informer article, we reported an imbalance system price of £4,000/MWh on Friday 8th Jan – this is the highest price in 20 years! Register for our next Monthly Industry Briefing and Power Market Update for a full review of January’s market activity.