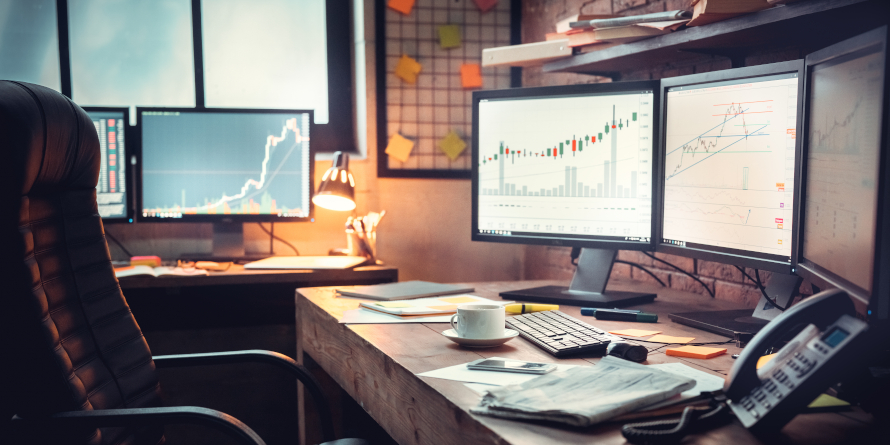 Flexible generation saw 33.4GWh of accepted offer volumes and 5.4GWh of accepted bid volumes in the BM in November. This compares to accepted offer volumes of 19.4GWh and bid volumes of 4.8GWh in October. Wind generation saw bid acceptances (curtailments) of 680GWh, which is more than double what was seen in October (308GWh). On December 3rd, BM prices reached £1,000/MWh as levels of wind generation fell and cold temperatures led to high levels of demand. Two CCGT plants had offers accepted at that price. National Grid issued a Capacity Market notice on the same day, but cancelled it again relatively quickly.

Short-term power prices saw few expensive days at both the beginning and towards the end of the month, which can be explained by renewables output. From the 10th to the 24th of November, wind generation was relatively high and stable, suppressing prices for the two weeks in the middle month. Intraday APX prices reached a maximum of £201.39/MWh and the maximum Day-Ahead price was £313.45/MWh - both prices occurred on the 26th Nov.

The market seemed to have panicked in the day-ahead auction as it then did not reach extreme price levels within-day. The main driver for this was the low wind generation during the evening peak (highest demand period), which was below 1GW on the 26th Nov. Due to the long spell of high wind generation during the middle of the month we have also seen 52 half-hourly periods with negative APX prices. In comparison last year in the same period we have seen five half-hours with negative prices.

Early in November, Power and Gas prices remained subdued whilst we were in the midst in lockdown 2.0 with less clarity at that time over whether or not we would see significant relaxation of the rules into December. Having begun November at £41.68/MWh, S-21 reached £44.08/MWh on November 10th, before falling away again to £41.50/MWh on the 20th. However, from that point onwards the contract value has continually risen, reaching a peak for the month on the very last day of November at £44.62/MWh. 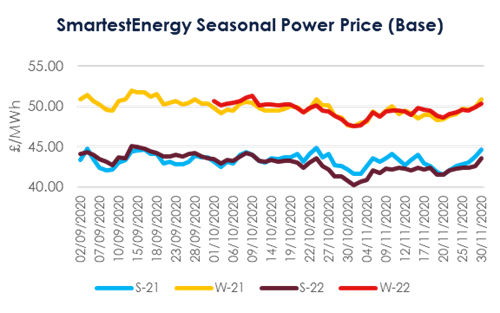 As we neared December, forecasted temperatures indicated cooler weather and higher gas consumption, meaning that Summer-21 Gas finished November around 34.57p/th, having gained just under 2p/th from the beginning of the month. The contract lost value over 4 consecutive days between the 17th and the 20th of November, before rebounding to its closing level across the last couple of weeks of last month. Additional risks also added to the price rise with Industrial action risking both French Nuclear power production and gas flows from Norway. Positive COVID vaccine related news also added strength to the short-term outlook.

Brent Crude saw a noticeable increase in value over the course of November – gaining more than $10/barrel. This Bullish sentiment is again of course linked to the vaccine news, which has now been exacerbated by the upcoming OPEC talks, where expectations are that a supply cut will be agreed. Brent ended the month around the $47.79 mark, down on its highest value of $48.70. However that is still at a level which represents a notable increase from the commodity’s opening mark of $37.54 – caused by that global uncertainty in early November alongside the US Election debacle.

Similarly, ARA Spot coal made consistent, gradual gains over the course of last month – albeit it did lose just over $5/tonne on the opening day of November. Finishing the month at $53.55, coal did at least recover $2.75 from its low point recorded on November 8th.

Carbon EUAs have strongly recovered from the downward trend we’ve witnessed over the past couple of months or so. Beginning November at €23.67/tonne, EU Allowances gained just under €5.50 overall to reach €29.14/tonne on November 30th. This end of year rally has been driven by increased generation load factors to support tight power system margins, alongside an ever-more positive future economic outlook.