Could pumped hydro storage be the silver bullet to net-zero? Head of Smart Generation Sales, Angus Widdowson discusses the role of energy storage in the UK’s transition to net-zero and reveals some exclusive statistics from our new State of the Market Report, launching this September.

On the approach to COP26 which takes place in November this year, net-zero has never been more topical. Prime Minister Boris Johnson has committed to legislate a new target to cut national emissions by 78% by 2035. This is a significant increase from the UK’s original goal of 80% reduction in emissions by 2050.

The economy is transforming on this transition to net-zero, the energy sector is becoming even more dominated by intermittent renewable generation and electricity demand is increasing with the growing uptake of Electric Vehicles (EVs). With this transformation comes a much greater need for flexibility and energy storage technologies to help keep the grid in balance.

According the BEIS Energy Trends, published June 2021, 43% of energy generated in the UK last year came from renewable sources, producing 134,298GWh - that is enough to power nearly 35 million houses (based on average domestic consumption).

Analysis of UK hydro generation from the Ofgem Accreditation Report for our State of the Market report reveals there are a total of 1,278 operational UK sites with a combined capacity of 2,632MW in the UK. Separately, there are four pumped storage sites producing 2,828MW (BEIS Renewable Energy Planning Database, REPD).

1097 sites are independently owned hydro projects with a total capacity of 461MW.

686 hydro sites are operating in Scotland with a capacity of 2,449 MW. Only 252 hydro sites are located in England and 244 sites are in Wales. Additionally, there are two Welsh pumped hydro storage sites with a combined capacity of 2,088MW. See a breakdown in hydro technology types by region in the charts below. 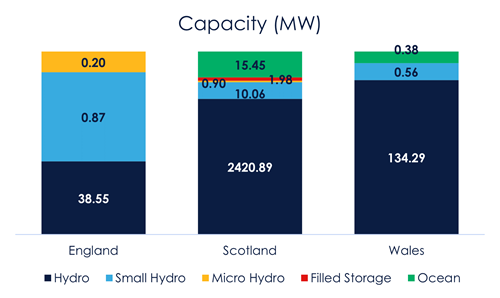 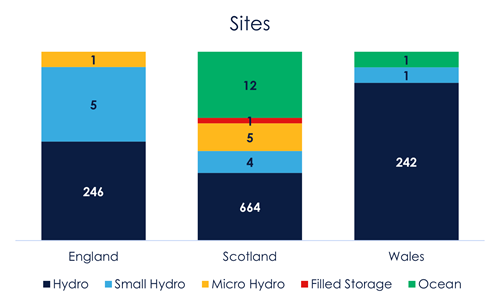 Electricity storage supports decarbonisation of the energy system and National Grid's Future Energy Scenarios Report 2020 predicts significant growth in storage technologies, including pumped hydro storage, behind-the-meter batteries, and compressed/liquid air projects. The contribution of these flexible technology assets depends on their size - the total energy that can be stored - and the length of time they can discharge at full output. National Grid state in the report, "while batteries now have the same connection capacity as Cruachan and Ffestiniog pumped storage facilities, they can store only 1/20th of the energy'. The report indicates there could be 5GW of connected Pumped Hydro capacity, with 100GWh of energy stored, by 2050 and possibly as soon as 2030.

The British Hydro Association explain ‘pumped storage hydropower provides a dynamic response and offers critical back-up during periods of excess demand by maintaining grid stability. When used in conjunction with other forms of renewable generation to pump the water back up to the top of the reservoir, this can help to resolve intermittency issues associated with other renewable technologies’.

Look out for our State of the Market Report launching in September, for our full analysis of the independent generation market and insights into the UK’s net-zero transition to date.

> Pre register for the report