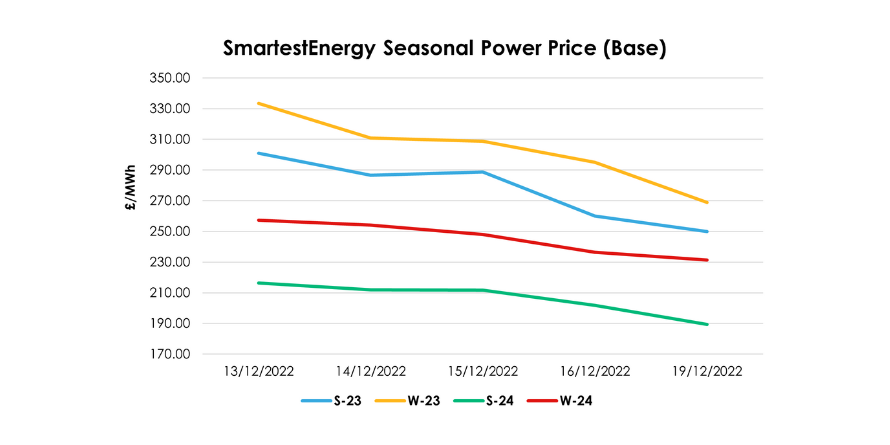 Head of Sales Trading, Fanos Shiamishis reports on the energy market activity, covering the period 13th December – 20th December 2022. On our end of day pricing tool, the Source, we published an in week high of £301/MWh for the Summer-23 seasonal power price on 13th December reducing to £249.97 yesterday. In this blog, Fanos shares the market news and updates from the last week.

Despite temperatures below freezing for the UK last week, warmer temperatures and high wind forecasts saw prices soften for within-month and month-ahead prices. Major European and Australian gas producers commented on the threat to long term liquidity risks caused by European gas markets due to the proposed price cap.

There was a steady flow of Norwegian gas in the UK and healthy LNG supply and storage levels which kept prices at bay. European storage is 87.3 % full amid withdrawals earlier in the month. European gas demand for this month is lower than the seasonal average as the cold snap has mainly impacted northern Europe.

On Thursday 15th December, UK gas rose due to a colder forecast than expected and storage withdrawals increased. Meanwhile, Germany received gas at its first floating LNG storage and regasification unit at the port of Wilhelmshaven that evening and the French national Transmission System Operator assured that France is safe from power cuts this month, but January could be a different story if temperatures drop.

Over the weekend and into Monday 19th December, gas and power prices softened as the weather turned milder with temperatures forecasted to revert to seasonal average possible even higher. Wind output is also increasing and expected to stay high until Thursday 22nd December.