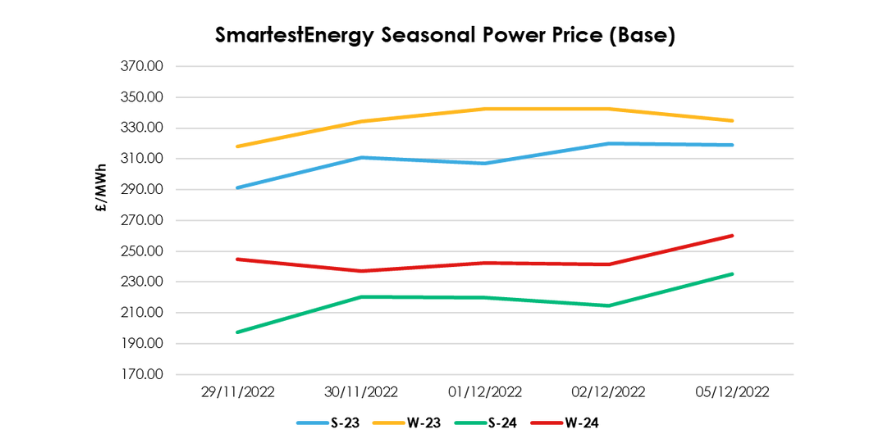 Head of Sales Trading, Fanos Shiamishis reports on the energy market activity, covering the period 29th November - 6th December 2022. On our end of day pricing tool, the Source, we published an in week high of £319.83/MWh for the Summer-23 seasonal power price on 2nd December. In this blog Fanos shares the market news and updates from the last week.

Last week, Norwegian gas flow to the UK was stable and the UK’s supply improved however, latest forecasts showed December’s demand looking a lot higher than previous outlooks across UK and Europe. NBP Day Ahead traded as high as 370 ppth amid the expectation that prices will increase. Issues at Troll gas field in Norway and UK’s Barrow North gas terminal added extra pressure, as well as maintenance at the Karsto plant in Norway.

Storage levels were 94% full, but this week we saw some of these inventories being withdrawn. Below-average temperatures were expected Northern Europe leading to UK power trading higher. As Dec 22 contract went into delivery, it traded as high as £362.50/MWh on Thursday, way below the highs we have seen earlier this year.

On Friday, Norwegian gas flow to the UK was up. TurkStream pipeline, which runs from Russia to Turkey, was almost at full capacity, higher than it has been in the last few months as Russia's exports to Europe have fallen by 43.4% this year.