September 2021: Our traders’ perspectives on a month of extreme price volatility 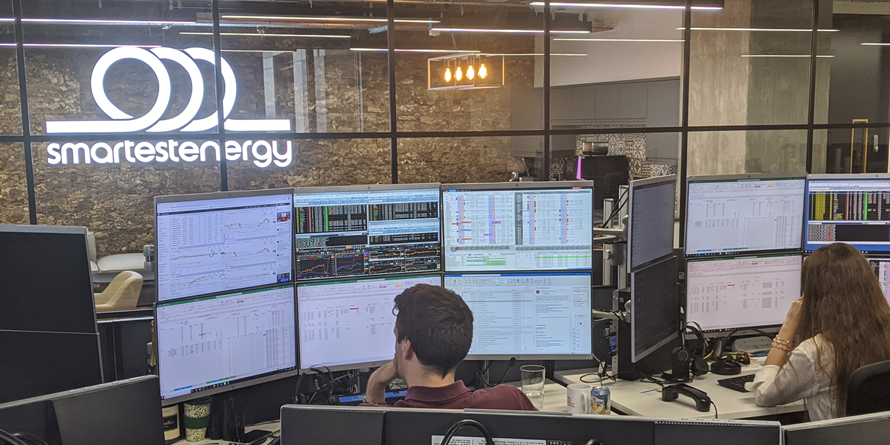 Head of Sales Trading, Fanos Shiamishis and Spot Power Trading Analyst, William Lake comment on the extreme price volatility in the forward and spot markets last month. They recap on the record gas and power prices and provide their expert insight into the key drivers behind the “Energy Crisis”.

Driven by the continued surge in global gas demand, seasonal gas and power prices reached record highs throughout September. On the 1st September Winter-21 gas was at around 128p/therm and by the end of the month it had risen to 226p/therm. With Asian demand tendering for LNG cargos into December, the rally in spot prices was further exacerbated and all forward periods continued to rally. Any “bearish” news only served to provide a short-lived respite from the upward trend. 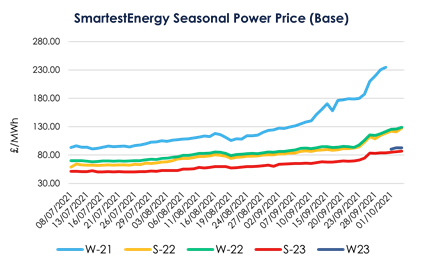 Winter-21 power prices followed the same trend, as prices increased significantly throughout September. The price cleared at £124.20 on the 1st September and by the end of the month it reached £234.68/MWh – that’s almost a 90% increase within month. Primarily led by the rally in gas prices, the entire curve increased.  In the prompt markets, we were given an insight into how tight the system can get during September and this provided a clear indicator towards peak prices for the winter.  The base/peak price spread continued to widen and Winter-21 Peak prices settled at £295/MWh by 30th Sep.

With Winter-21 and Q4-21 nearing expiry, Summer 22 saw prices in the region of £120/MWh, creeping up throughout this week to the £127 mark, likely driven by some downstream portfolios looking at the front year and accelerating their Summer-22 hedging.

Record Prices in the Spot Markets

The maximum system price for September was £4,037.80/MWh set consecutively from 4-5pm on the 9th September (settlement periods 33 and 34). This record price saw two units at EDF’s West Burton A plant, which is due to be taken out of service next year, returned to service to provide grid stability. West Burton 1 coal-fired plant was brought out of stand-by at £4,000/MWh and West Burton 2 at £,3999/MWh, as demand on the transmission system peaked at 35.5GW through the evening peak.

Unseasonably low wind and solar generation over the summer resulted in very low reserves of gas. Gas storage levels were at only 67% when they are usually at 82%. This pushed day-ahead gas prices up to £197 on the 15th September, which seemed very high at the time but we’ve since seen more record-breaking gas prices on the 6th October when it hit £360 and buying for the month of November was priced at over £400.

Maximum Day Ahead N2EX power prices reached a peak of £424.61/MWh on the 15th September, which set yet another record high. This was much the story throughout the whole of September.

To add even more pressure, National Grid’s key interconnector, IFA1 in Kent, was hit by a fire. The major subsea power link between the UK and France was already down by 1GW due to a planned outage which is due to end later this month (23rd October). The remaining 1GW will now be unavailable until March next year. The North Sea Link interconnector is also running at half capacity for the whole of this month. This will undoubtedly push a very tight system even shorter this coming month.

Negative prices also returned this month, with the minimum system price reaching minus £66.73/MWh between 12:30 and 1:00pm (settlement period 26) on Sunday 26th September. As expected, demand levels were very low, which saw the system going long by 1.7GW. Wind out turned high at around 8GW during this time, which was enough to push prices below zero. National Grid curtailed wind output for large part of the day, up to 1GW+ when prices reached the minimum negative value.

High demand across all fuels

Brent Crude opened at around $71/barrel, stayed in the lower $70s as we got towards the middle of the month and reached a high of $79.94 on Monday 27th September.  The extent of the global gas demand driven price rally has buoyed power prices to the point where all fuels are in demand either as proxy hedges or for spare generating capacity.

Coal (ARA spot) increased from $156.25/tonne at the beginning of month to $201 on the 27th September and hit an end of month high at $208.50/tonne on the 29th Sept. At the current power prices, coal fired generators are needed to balance the riskiest periods.

Carbon EUAs continued on a high from the previous month, registering at €64/tonne on 27th September. With higher carbon emitting units needed to generate, there was an expectation of more EUA and UKA demand supported prices, although not quite the rally seen elsewhere.

Register for our next Market Update webinar

Tune into our next monthly webinar on the 8th November at 3pm for the latest insight from our traders on the power market activity for the October and the headline energy news stories spanning: security of supply; regulation; policy and innovation.

> Register for our next monthly webinar