In the latest edition of our monthly power market blog series, Head of Sales Trading, Fanos Shiamishis, Sales Trader Jean-Philipe Marty and Trading Optimisation Analyst, Leo Burdorf take a look at changes across commodity markets throughout April, as well as the drivers behind them. 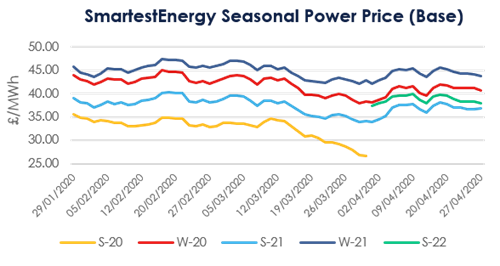 Winter 20 power opened April at £38.10/MWh, it’s now trading around £40.67/MWh, having hit an in-month high of £42/MWh, driven by EDF announcements of a reduction in French nuclear generation to reduce fuel and maintenance costs. Forecasting of the easing of lockdown restrictions in Germany (alongsidethe EDF announcement) saw a recovery of EUA’s to over €20 which supported power and gas prices across Europe. Details on the reduced production were minimal with only a 30% (circa 30TWh) reduction in output for the rest of the year. whilst maintenance plans are rescheduled into this year. It is important to note that maintenance plans are routinely scheduled to align with “optimum” market conditions

Winter 20 NBP gas peaked at 34.05 pence per therm (p/th) in April, gas has steadily reduced in value now trading around the 31.85p/th mark with no real risks noted during the month in supplies.  Recent threats to Russian flows into Poland have yet to impact TTF prices with rates needing agreement for Yamal flows through Poland.

Brent Crude has shown significant volatility over the course of April. Having started the month trading at $24.91 per barrel, steady gains in the first week of the month saw the commodity hit $34.24. Gains pared to $25.66, before the impact of negative US oil prices (on the now expired WTI May contract) hit the market, causing a sharp drop down to $16.50 per barrel. The negative prices were seen due to long positions willing to pay to sell rather than incur storage and/or freight costs, or the “negative roll yield”.

Coal (ARA Spot) has weakened over the course of the month, having previously remained firm in the face of other markets falling. Having lost just over $3 per tonne between the beginning and the end of April, it is now seeing the effects of reduced global demand for electricity and more favourable weather conditions for renewables as we enter the sunnier months affecting the generation stack. In fact, the combination of record high levels of solar generation (9.68GW on April 20th) coupled with record low demand (24.18GW on 12th April) has allowed the UK to set a new record in going over 18 days without using coal-fired generation in the past month.

Dec 20 EUA recovered from its low of €16.50 to €19.50 with reduced nuclear generation and easing of restrictions in some EU nations adding bullish sentiment.

The UK short-term power markets in April 2020 showed an increased number of negative prices (16 hourly periods with negative N2EX prices) and generally low prices compared to the same period in 2019. The maximum Day Ahead N2EX price was £43.41/MWh and the minimum price was -£19/MWh. The average N2EX price was £24.18/MWh. Daily N2EX price spreads showed an average of £25.95 with the maximum spread being £48.30.

In contrast, April 2019’s average price was almost twice as high with £43.57/MWh and the maximum price was £74.1/MWh. Also, the occurrence of negative Day Ahead prices is something we are only seeing this year, as April 2019 had no negative prices.

In the Balancing Mechanism (BM), we have seen an average accepted offer price of £56.81/MWh for gas peakers. This highlights how valuable the access to different markets can be given the low N2EX prices. April 2020 also showed a record level of accepted offer volume for gas peakers 14,828MWh.