In the latest edition of our monthly power market blog series, Head of Sales Trading, Fanos Shiamishis and Trading Optimisation Analyst, Leo Burdorf take a look at changes across commodity markets throughout January, as well as the drivers behind them.

The system was 4GW short on Sunday 9th February, as Storm Ciara hit around 1pm and demand out turned above the forecast. It is possible that high wind speeds contributed to this, as when wind speeds are faster than the tolerance levels of wind turbines they can sometimes shut off, causing a gap between forecast generation and demand. National Grid used gas peakers (including SmartestEnergy's BMUs) to balance the system, with overall accepted offer volumes of more than 1GWh. 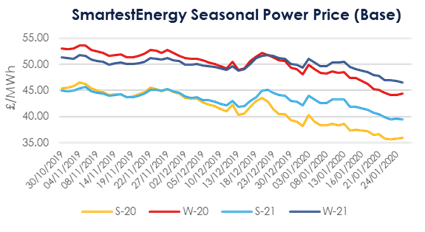 The Summer 20 power contract weakened throughout January, losing £4.50 in value. Having opened the month at £39/MWh, S-20 softened to £34.50/MWh by 31st Jan. With the remainder of the winter outlook indicating very mild temperatures, the February and March contracts continued to soften too - adding pressure to the Summer 20 gas contract. After starting January at just over 30 pence per therm (ppth), S-20 gas has lost over 5ppth, trading down to 24.75ppth.

Brent Crude lost the value it had previously built up in December. Reaching a peak of $69.06 per barrel in the second week of January, the rest of the month saw a decrease to below $60 as the coronanvirus outbreak sparked fears over a reduction in oil demand due to transport restrictions. Oil now trades at around $59.12 per barrel.

Similarly, coal (ARA Spot) has seen a consistent downward trend since January 1st. Having started last month at around $53 per tonne, the commodity has lost almost $3 in value, now trading at around $50.35 per tonne. This latest figure does represent a bit of a bounce-back from the in-month low of $49.75 however.

Carbon (EU Allowances) meanwhile have remained very steady over the period in question, trading within a range of €1.59. Opening January 20 at around €24.15 per tonne, Carbon is now trading at around €24.52, after a January low of €23.77 per tonne. All eyes are now on further news and announcements around the restart of the UK auction post Brexit.

System Prices showed a narrower spread in January than they did in December, with a maximum of £150/MWh, whilst the minimum was at - £11.21/MWh. January also showed a record level of offer acceptances from gas reciprocating engines in the Balancing Mechanism, reaching a total of 12,331MWh. By way of comparison, National Grid accepted 7,931MWh from gas reciprocating engines in December.

Day Ahead N2EX prices, traded a much narrower range than they did in December too. The maximum was £65/MWh, whilst the minimum price was £7.25/MWh. Due to mild weather conditions and low gas prices, Day Ahead prices have been more than 40% below last year’s January prices.