In the latest edition of our monthly power market blog series, Head of Sales Trading, Fanos Shiamishis, Sales Trader Jean-Philipe Marty and Trading Optimisation Analyst, Leo Burdorf take a look at changes across commodity markets throughout February, as well as the drivers behind them. 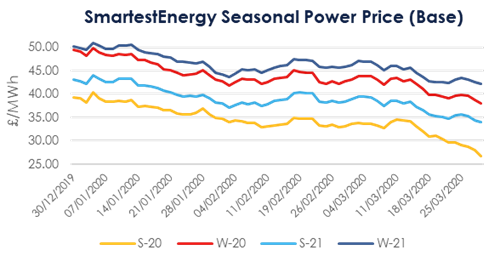 Beginning with seasonal power contracts, prices have continued in sharp decline over the past month. Having opened March at £33.70/MWh, a significant amount has been shaved off the Summer 20 contract, which settled at its all-time low price of £26.50/MWh.

Gas has mirrored this too with a drop of over 6.5 pence per therm across March – with the summer 20 contract now trading around the 17.79p/pth mark. However, given increased demand on colder days, there have been short-lived rallies in the price this month, reaching a peak of 24.27p/pth. With global demand “destruction” due to COVID-19’s forecasted impact on global economies and populations, both speculators and consumers have been shedding Summer 20 volume and depressing prices. Contango (higher forward season prices) remains beyond Win-20 but all forward contracts have been impacted by the sell off and have seen similar monthly price falls.

Brent Crude has almost halved in value over the month, driven of course by huge cuts in demand caused by the self-isolation and social distancing measures caused by Coronavirus. Having started March at $50.52/barrel, Oil prices suffered initially due to failed OPEC pacts to cut supplies, before falling down to around $27.77/barrel thanks to the escalating pandemic, inventory builds throughout the month remaining strong and demand forecasts for the rest of this year crashing off.

Coal meanwhile (ARA Spot) has steadily held its value over the course of more and more countries going into lockdown. The commodity is now only trading around 25 cents lower than it’s opening mark for March which was $47.90/tonne. The range traded across coal has remained narrow too, with a monthly low of $45.80 recorded on March 12th. Despite some price recovery towards the end of March, this has been short lived with all gains eroded by the 31st. Softening gas prices throughout Winter 19 has also kept coal generation lower in the merit order, reducing the bid stack on forward financial coal hedges. Reduced freight availability is also currently adding risk to delivered coal prices.

Carbon (EU Allowances) have plunged this month. Having held steady around February’s closing level up until the 11th of March (when it traded at around 24 euros per tonne), carbon lost over 8 euros 50 per tonne in the space of a week as soon as national lockdowns were announced. The aviation spot auction failed to clear due to no bidders during March, and the “technical” resistance level of €16.50 was tested several times throughout the month.  Whilst emissions intensive industry remains restricted and global transportation is reduced, all eyes are on how Governments will support industries and the deal with a likely glut of December 20 EUAs. It’s now rallying slightly, trading at around 16 euros 93 cents per tonne.

Day-Ahead N2EX prices averaged £31.67/MWh for March 2020 compared to £44.29/MWh for March 2019. This is a reduction of 28% for the average N2EX price. However, we have also seen more volatile N2EX prices this year with a range from £1.63/MWh to £99/MWh. The maximum price was a first indication of the events of the 4th March (where wind generation was lower than forecast and demand significantly exceeded supply) as system prices went above £2000/MWh. The de-rated margin as a significant influence on the N2EX price was already low at the DA stage.  In 2019, the minimum and maximum N2EX prices were £20/MWh and £83.18/MWh respectively.

For system prices, it's better to assess the median rather than the averages for this month - as these are skewed by the 4th of March. The median for March 2020 for a “short” system was £43.8/MWh and for a long system £11.5/MWh. The system was long for 829 settlement periods and short for 656 periods. To compare this with March 2019, the median system price for short periods was £53.15/MWh and for long periods £37.15/MWh. Additionally, interesting is the comparison between the system price spikes for both years. In March 2019, there were six periods with prices exceeding £100/MWh and in March 2020 we saw 12 periods with prices above £100/MWh. In conclusion, we have seen double the amount of price spikes, but the median prices were significantly lower.

In the Balancing Mechanism (BM), we have seen accepted offer volumes from gas peakers of 10,208MWh for March 2020, compared to offer acceptances of 11,670MWh for February 2020. The average accepted offer price for gas peakers decreased slightly from £69.76/MWh in February to £66.76/MWh in March.