In the latest edition of our monthly power market blog series, Head of Sales Trading, Fanos Shiamishis, Sales Trader Jean-Philipe Marty and Trading Optimisation Analyst, Leo Burdorf take a look at changes across commodity markets throughout May, as well as the drivers behind them. 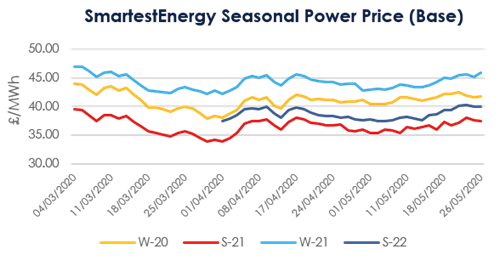 As we move into June the Winter-20 contract comes into sharper focus, trading at around £41.80/MWh, which is up around £1.50/MWh from it’s opening position on the first of May. Power was generally well supported across the month with no noticeable price drops. This was largely due to updated information around the French nuclear outages and the UK announcing plans around thes the easing of lockdown, which guided a bullish view for Q4-20, supporting those Winter-20 contracts.

Winter 20 gas by contrast lost value across the month of May. Whilst it’s only trading 0.13ppth lower than its opening mark for the month, its current level of 31.07ppth is a fair drop from it’s in-month peak of 32.72ppth. This remains largely driven by Global LNG supplies remaining strong, with Qatar recently reaffirming production levels will not be reduced. High inventory levels and strong flows into the UK have also seen sub 9ppth trading for June and July whilst Q4-20 closed the month around 26.50p/therm.

Onto oil and Brent Crude has recovered strongly in May after the impact of negative oil prices (on the US WTI contract) caused knock on effects, leaving Brent at $16.50/barrel. Since then, the value has more than doubled, now trading around $36.23/barrel. The recovery of the June contract to these sorts of levels confirms that the WTI negative pricing we saw in April was an effect of financial positions selling out their physical obligations. Since then we have seen OPEC+ implement a production cut of 9.7m barrels per day. When combined with European and US easing of lockdown restrictions and Chinese demand also increasing, its clear to see why the price has bounced-back. That said, prices remain relatively soft, albeit above the perceived minimum cost recovery threshold of $30 per barrel.

Coal (ARA Spot) has weakened slightly over the course of the month, continuing the trend we saw in April. Having lost just over $1 per tonne since the beginning of May, Coal now trades at around $38.75/tonne. The past month has also seen a landmark event, with the UK surpassing 1,000 hours without using any coal-fired generation, thanks to a combination of low demand and the great weather we’ve been having creating ideal conditions for renewable generation. Similarly, reduced prompt demand and some recovery in GBP in the latter half of May-20 also saw a $1.45/tonne loss in the May-20 API2 contract, down from its opening price at the beginning of the month at $40/tonne.

Carbon (EU Allowances) have finally found some stability after last moth’s significant loss in value. Having traded a range of 3 euros and 8 cents per tonne, EUAs are now steadily gaining in value at around 21 euros 53 cents. The main correlation in EUA quotes has been around global economic indicators (such as stocks for example) again related to the easing of Covid-19 lockdown conditions. Some strength also came from the improved demand outlook for Q4-20 whilst the significant aviation consumption profile remains bearish with no clarity yet on restrictions easing in that sector.

​System Prices reached a maximum value of £65/MWh this month, whilst the minimum price hit -£70.49/MWh. Overall, there were 69 different half-hourly periods with negative imbalance prices. Most of these showed on the weekend of the 23rd/24th May, particularly as wind was being bid down in the Balancing Mechanism. In total, wind bid actions reached a total of 128,111MWh for the weekend, which is almost as much as we saw across the whole of April. This was due to low weekend demand on these dates, coupled with very high forecasts for wind and solar generation.

The weekend of 23rd/24th was very unusual and showed very low negative prices, particularly for the solar peak and overnight. On Thursday, Over The Counter baseload prices for the weekend were also negative - which is a very rare occurrence. This was then also reflected in the Day-Ahead and Within-Day prices on the weekend.

Day Ahead N2EX showed a maximum of £43.22/MWh and a minimum of -£38.80/MWh. Surprisingly, the minimum occurred on May 1st and not during the aforementioned weekend. The daily spreads were not as volatile as the APX prices with an average of £23.09/MWh. In total, there were 35 hourly periods with negative prices with most of them occurring during the weekend of 23rd/24th.

Within Day APX prices again saw a month without any significant spikes and a maximum price of £48.91/MWh. The minimum price was -£58.65/MWh and there were 81 periods with negative prices. Especially for the weekend 23rd/24th Within Day prices were mostly negative.