UK REGO demand has doubled in the last 4 years Last week we held our Non-Commodity Costs and Generator Revenue Streams webinars, which included for the first time, a comprehensive look at Renewable Energy Guarantee of Origin (REGO) prices. Head of Pricing, Tom Putney, recaps on the key price forecasts we shared in the webinars and takes a deep-dive into REGO price history.

As the demand for renewable power has risen significantly as corporates focus on climate targets, the UK electricity market has become more saturated with new and existing suppliers offering 100% renewable products. The demand for REGOs has doubled in the last four years. In this blog I’ll be exploring the rising price of REGOs, the market drivers behind the increase and what this means for both businesses and generators, as well as a short recap on the headlines covered in the non-commodity costs and generator revenue streams webinars.

Driving factors behind the rising price of REGOs

The push from government to reach net-zero targets and the mounting consumer pressure on businesses has seen the demand for renewable power to grow rapidly. We have also seen more and more domestic suppliers switching to 100% Green tariffs as standard, which has added huge demand for REGOs. To put this into context, back in 2015 50 TWh of REGOs were redeemed by suppliers, but by 2019 this was up at almost 100 TWh, doubling the UK’s demand in four years.

In recent months, the increase in prices have not just been influenced by consumer and business demand for renewable power alone, there are also external factors, such as exceptionally low wind generation with wind producing just 3% of the maximum wind generation Britain’s power market has seen in the last 12 months. Europe has also seen a low supply, meaning not just less renewable power but fewer renewable certificates being issued, as they are only issued based on capacity generated.

So, what does this mean? This leads us to the importance of credibility and certification of 100% renewable products to give sustainability-conscious businesses the confidence and transparency that every MWh of power they procure is backed by a UK recognised renewable certificate to meet Scope 2 GHG Reporting requirements.

As corporate renewable supply contracts look to renew, we can expect higher REGO premiums, whilst on the other hand renewable generators can potentially see an increase in that revenue stream.

The History of REGO prices

SmartestEnergy have been trading REGOs since the removal of the Climate Change Levy (CCL) and subsequent removal of LEC certificates back in 2015. We were also the first supplier to guarantee a REGO price for independent generators. Our REGO expert, Vishnu Aggarwal, Deputy VP of Origination and Renewable Trading, recently delivered a presentation where he looked at the history of REGOs. He explained using the below chart:

“The REGO market took some time to develop and by 2017 it became a benign market with little price volatility. Summer 2018 saw a warm European summer with Nordic hydro levels at a low and still market conditions which caused Nordic hydro price to spike to all time high (shown on the graph below as a dotted line). The UK REGO price started to increase as REGOs were exported to the continent, which saw UK REGO exports increase to approximately 8TWh.

Prices were affected momentarily by Brexit in January 2020 but subsided shortly afterwards. The Covid-19 pandemic was a factor in reduced REGO prices, as the impact of demand destruction in suppliers power portfolios impacted the price (see CP19 - Orange line on the graph) and many suppliers took a step back from hedging REGOs. The end of the compliance period from April to May 2021 resulted in UK suppliers coming to market to fill their annual obligation and because of significant demand of an  illiquid product the market pushed higher. Over time we have seen a lot of UK suppliers changed their product offerings to 100% renewable power as standard.” 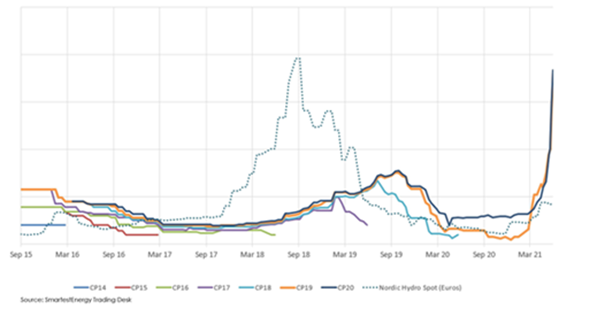 A recap on our key price forecasts from our latest webinars:

In our Non-Commodity Costs webinar on the 31st August, we also covered:

In our Generator Revenue Streams webinar on the 1st September, we revealed:

Tune into our next Non-Commodity Costs and Generator Revenue Streams webinars on the 25th & 26th January at 11am, where I’ll be providing an in-depth view of the latest forecasts for wholesale, environmental and network charges, and subsidy schemes and embedded benefits.