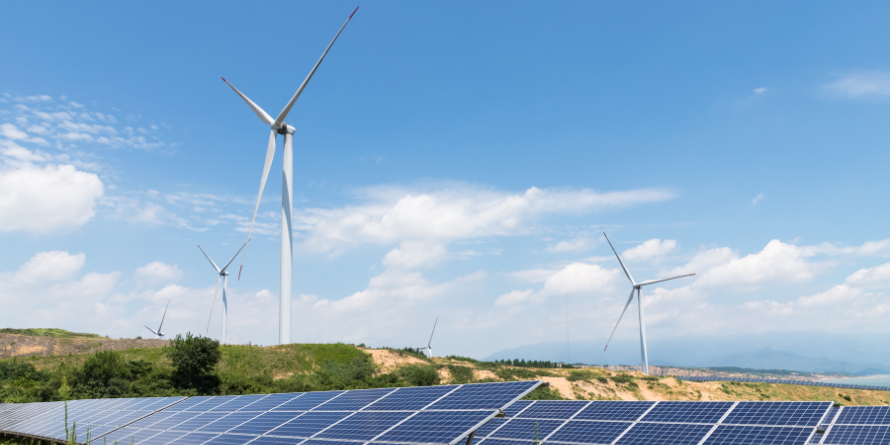 Head of Sales Trading, Fanos Shiamishis looks back at the power and gas markets throughout April, while Head of Spot Dispatch Trading, Simon Kneale explains negative system prices on Bank Holiday Monday 5th April, when system prices drop to -£45 as an impressive 80% of Britain’s power came from zero-carbon sources.

With April classified as the coldest April in the UK on record for the last 60 years, demand across power and gas increased, with Winter-21 power prices hitting an in-month high of £69.92/MWh on the 22nd April.

The impact of the cool temperatures and much reduced renewable power production saw some very high prompt prices in periods where peak demand strained the system. This seemed to set the scene for forward months, with peak prices in particular increasing during April by £10/MWh for May-21 and £9.25/MWh for Winter-21. 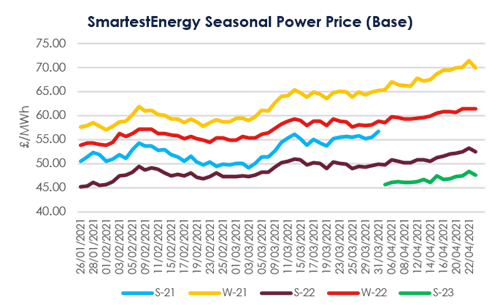 Liquidity remained scarce for Q3-21 with no peak trades registered at all during April. Further gains were made after EDF published the extension of the Sizewell B maintenance outage by 3 months, adding further premium on spark spreads and gas contracts for the remainder of 2021. Continued new highs registering for EUA contracts throughout April also fuelled gains for power during the month.

Winter-21 gas has followed a similar upward trend, opening the month at £55.18ppth, peaking at £60.60ppth on the 22nd April. The short-term frost saw increase gas flows in the prompt markets across Europe, pushing buying activity further down the curve to rebuild inventory for the Winter. Ukraine Month Ahead Interruptible Capacity auction for the transit point Sudzha failed to attract any bids for the Russia/Ukraine border location, setting off a bullish trend in alternate flows via LNG, sharp rises for May, June and Q3, with shorts being stopped out. The EDF Sizewell B announcement saw spark spreads widen and brought CCGT’s into the fold for Q3-21 and Winter-21 hedging.

Carbon EUAs continued to rally throughout April setting new high records, peaking at €48.40/tonne on 28th April and retaining the gains to settle the following day at €48.08/tonne. 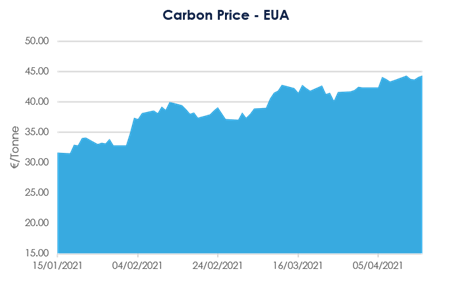 EUA and UK agreements on reduced allowances started the rally earlier in the month, speculators calling new “breakouts” on technical, as well as strong fundamentals (reduced nuclear output in UK during Q3-21 and short-term low wind output) all supported the upward trend.

Brent Crude has added circa $8/Bbl this month, having opened at $64.98/barrel and settling at $68.36/Bbl on the 28th April. The pandemic crisis in India had little effect to offset the optimistic outlook from major banks and commentators on the forecasted global economic growth and demand recovery for fuel.

Coal (ARA spot) has been linked to the resurgence in demand linked to increased productivity globally. Beginning the month around the $70/tonne mark, dropping to around $67-68/tonne in the middle of the month to then increase to over $76.8/tonne by 29th April.

System prices went into negative territory on the Bank holiday, 5th April, dropping to -£45/MWh as nearly 80% of the UK’s energy supply was from zero-carbon sources at 1pm – the greenest it has ever been! Wind made up 39% of the energy mix, 21% from solar and nuclear generated 16%. System constraints for wind generation were put in place to help manage the stability of the system. In the afternoon, we also saw high solar generation, especially during Settlement Period 31. Batteries, pumped storage and biomass units bid down into negative territory.

On Monday 12th April, system prices peaked to £1,971.59/MWh in the evening due to colder temperatures putting an upward pressure on power demand and low renewable generation, with wind generation around only 1GW all day.

In the Balancing Mechanism (BM), SmartestEnergy ranked 3rd (amongst direct competitors) with an average cashflow of £15,665/MW recorded for April.