In this month's power market update, Head of Sales Trading, Fanos Shiamishis and Trading Analyst, Leo Burdorf look at power and gas markets throughout March, where easing lockdown restrictions have supported a price recovery trend, despite LNG shipment disruption by the "Ever Given" blockage on the Suez Canal.

Prior to the last day of trading, Summer-21 power price peaked on the 15th March, reaching £55.25/MWh, the highest since 13th January when the baseload price reached £54.25/MWh. More gains were added on just before contract expiry (on 31st) where the baseload closed out at £56.50/MWh. 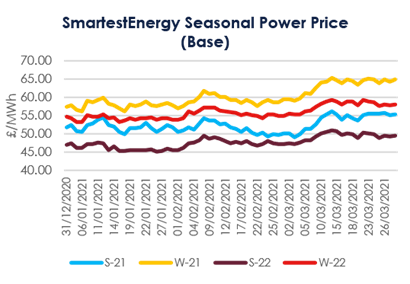 The underlying gains were focused in the peak contracts where the spread between the base and peak April-21 contract reached £6/MWh mid-month, to then settle at £3/MWh. The difference was more marked for the summer-21 contracts, which settled at around a £5 spread between the base and peak contract. The key driver is the scarce availability of largescale generators to meet short term peak events when renewable output expectations are reduced in the in the near term.

An increase in gas price was heavily impacted by the blockage of the Suez Canal between 23rd March to the 29th March, causing some premium shifting between the summer months, into May. Around 8% of global supply of LNG fuel travels through the Suez Canal, so the grounding of the "Ever Given" container ship caused significant disruption to LNG flows, including delays around Qatari LNG shipments to Europe.

You'll see from the two charts how these price spikes align with the carbon price movement, reaching an in month high of 42.86 euros per tonne.

Oil traders were not so convinced on the recovery scenario with gains at the beginning of the month more than offset by the end of March. The downward trend prevailed, despite the repeated headlines around OPEC+ intentions to further extend supply cuts to June.  Reduced demand outlook was reported to be the main driver.

Beginning the month around the $65/tonne mark, coal (ARA spot) steadily increased throughout March to just over $68/tonne. Severe floods in Australia rocked coal markets with around a fortnight of rail freight and port capacity disruption, while severe conditions subsided, and repairs were conducted.

High winds pushed system prices down below zero, hitting a low of -£61/MWh on Thursday the 11th March. Night prices dipped to the low level, continuing the trend of increasing periods of negative prices in the UK, as wind generation needed to be curtailed. Despite the general growth in periods of negative pricing, the beginning of 2021 has seen more record highs than record lows with the imbalance price hitting £4,000/MWh in January.

In the Balancing Mechanism (BM), SmartestEnergy ranked 4th (amongst direct competitors) with an average cashflow of £10,293/MW recorded for March.